Petra is an archaeological and historical city located in the southern part of Jordan. Also one of the new 7 Wonders of the World, the rose-colored city is a popular tourist destination. The city is famous for its intricate stone carving architecture and water conduit structures.

Petra became a World Heritage Site in 1985 and has only gained popularity since. Today, tourists frequent its most popular destinations: Al Khazneh and the Petra Theater. It is now a symbol of Jordan, which offers a diverse range of tours, for Latter-day Saints travelers to adventure backpackers.

Al Khazneh, known as The Treasury in English, is a temple located near the entrance to Petra. It stands at 39 meters high, with its edifice carved into the sandstone hill like most of the other structures in the city. It is Petra’s most famous monument, also believed to be a mausoleum for a Nabataean King during the 1st century BC.

Aside from the incredible architectural feat of carving a temple directly onto sandstone rock, the structure also peaks at noon to late afternoon, where its exterior turns a vibrant red color. This is also where the city got its name, due to the stone structures turning rose colored and reddish under the light of the sun.

It’s called the Treasury because of the local Bedouins that lived in the city several years ago. They believed that Egyptian pharaohs hid their wealth and treasures in the urns inside the temple.

The Petra Theater is a 1st century AD amphitheater carved into solid rock at the center of Petra during the reign of King Aretas IV. The design of the theater shares some similarities with the Roman amphitheater; however, the structure carved into solid stone is characteristically a Nabataean style.

Seven stairways compose the auditorium and can accommodate up to 4,000 spectators. This theater played an important part in the culture of the Nabataeans due to its strategic location in the political and economic center of the city.

A majority of the structures defining features eroded over the years due to the numerous flash floods and earthquakes it endured in the past. Today, it stands facing numerous tombs toward the center of the city.

How to Get to Petra 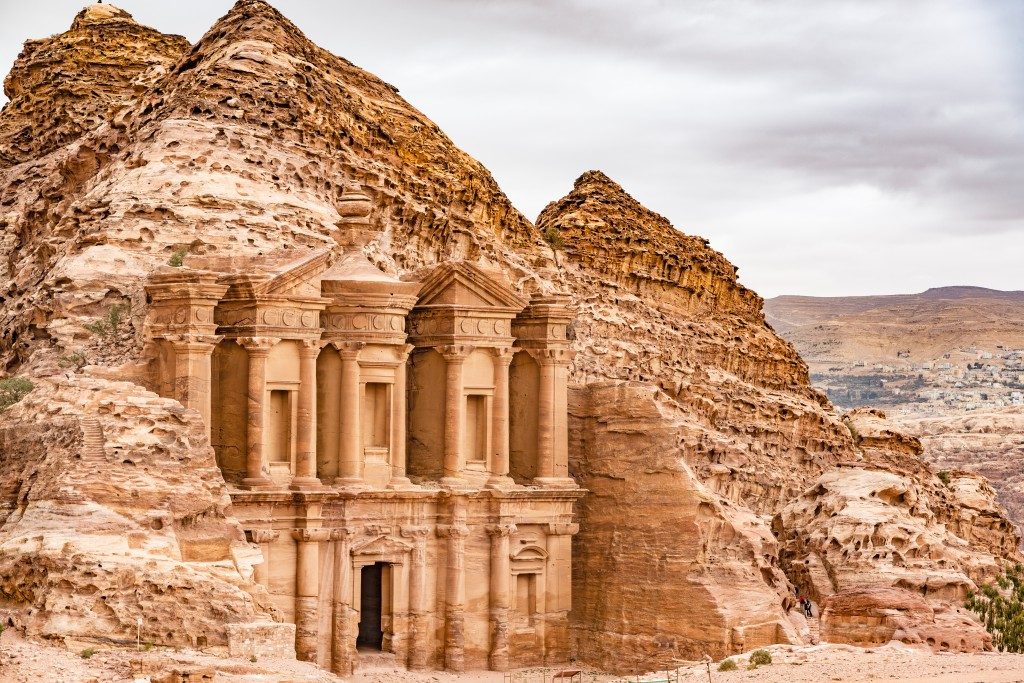 You can reach Petra via bus or car from Amman or Aqaba. It will take you 30 minutes on foot to reach The Treasury, however, passing through the entrance, and through The Siq. The passages are narrow and made of sandstone, like most of the structures in the city. It is also a warm city, so wear light clothes and prepare for the heat of the sun (and the big crowds of other tourists).

You can explore the city of Petra mostly through walking, due to the narrow pathways and the structure of the city. You can also choose the option of riding a horse or camel carriage, but this might cost you extra.

See the archaeological feat of Petra’s numerous infrastructures up close by visiting the city. Located in the southern part of Jordan, the rose-colored city welcomes tourists and travelers through its rocky pathways and reddish stone walls. Petra’s culture and history await you.